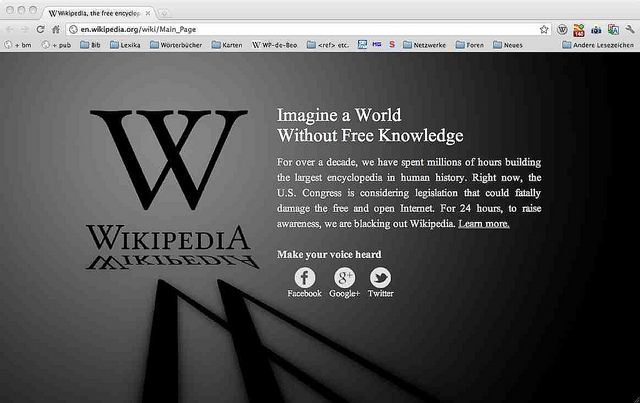 If you haven’t read about SOPA and PIPA then you should now. Why should YOU get involved in the intervention of the passing of SOPA and PIPA?

The fact that you are reading this post tells me you’re a blog reader. From this I can make the assumption that you’re an avid Facebook user, a user of Twitter and a regular user of YouTube too. If you’re anything like me then you probably have 500+ friends online, organise most of your social and business life on social networks and check your notifications at least 5 times a day either on your laptop, workstation, mobile phone or tablet. Sound familiar? If so the passing of this bill will directly affect your daily life. Then again, perhaps you love discovering new music, reading about the latest fashion trends, or simply enjoy browsing round on a journey with no purpose. If so then this bill will affect you too.

This aggressive act to control the internet by the US is the first step in a scheme to regulate, control and censor the freedom of the internet by powers that don’t fully understand the internet and its architecture. The passing of these bills will see free use of websites severely limited and potentially completely suffocated under a blanket of law which looks to oppress the freedom to share information and content, the key principle upon which the immeasurable success and power of the information super highway has been built.

The proposed bills are long, complex and obscured by a legal jargon comprehensible only to lawyers and law makers. But being someone who has studied Internet sciences, cyberspace law to degree level and who works in digital marketing, I have given what little time I have to read through the bill and try to make sense of it. My specialist area is in social media marketing and management, which is based on the principle of content sharing, peer to peer recommendations and online interaction between brands and their consumers via platforms such as Facebook, YouTube and Twitter, so my opinions are based on this expertise; I am not simply jumping on the bandwagon as someone uneducated on the matter.

This bill is portrayed as a must-have measurement to stop fraudsters online and the widespread committing of copyright infringement which is costing the music, game and film industries billions each year. SOPA and PIPA have been introduced in the Senate and are moving quickly through Congress in the US. Portrayed as the answer to stop piracy, it gives the government and corporations the ability to censor the contents of the internet, in the name of protecting “creativity”. This pair of bills creates an environment whereby the law would let the government or corporations censor entire sites and online functions from the internet so long as they can convince a judge that the site hosts the functionality to facilitate copyright infringement.

After reading through there was a clear sense of control, that in the form of a school bully and I have done what I can to make sense and break down the main points for my readers to understand.

IF you’re found guilty of infringement the bill states that there is no requirement that the accused be notified of said accusation, resulting in little to no chance of an opportunity to appeal or counter the decision by acting with a counter-notice. In the unlikely event that the accused is aware of such an accusation the only way to provide said counter-notice is to agree to submit to U.S. jurisdiction (5,A,ii)

If the accused website domain owner operates outside of US jurisdiction and in counter claim that they are not in breach of the accused offense under penalty of perjury that your product or service does not fit the definition of:

An `Internet site is dedicated to theft of U.S. property’ if [a portion of the site is US-directed] and is used by users within the United States and is primarily designed or operated for the purpose of offering services in a manner that enables or facilitates [copyright violation or circumvention of copyright protection measures] you are in line for committing the offense of perjury – “willful giving of false testimony under oath or affirmation, before a competent tribunal”. Now, in the unrealistic event that you are made aware and you manage to provide a counter-notice, or an ad network or payment provider (such as sagepay)  fails to cut off service within five days, then the accusing party can and will initiate a lawsuit based on this infringement. In the event of the domain owner being uncontactable or identified, the law states that they are able to serve an in rem lawsuit against the domain in question.

In the event they win the lawsuit (which will be likely in the event of nobody being identified and thus notified to challenge this act), the court will award ownership of said site and domain. At this point only is the accuser required to notify the accused of the action being taken against them.

So you may be confused as to why this would affect normal websites that do not facilitate the illegal sharing of pirated software and illegal information. ANY website which has functionality for comments, social shares and the uploading of content of any kind, it is highly likely to be in breach based on the open nature of organic, user generated content and interaction. The only way to actively avoid the possibility of being in breach of these two bills would be to scan, check and audit every single interaction or piece of information, link, image, file and comment placed on the domain. Can you imagine this on the likes of Facebook, Twitter, Wikipedia, not to mention company or personal blogs and websites. By SOPA’s interpretation, Twitter, YouTube, Facebook, Wikipedia, Gmail, Dropbox would be “Internet sites…dedicated to theft of U.S. property”.

By imposing these laws and sanctions not only does this change the structure of the internet but it creates difficulty in the growth and innovation of the internet  at a time when we are experiencing a social boom, it puts power for censorship and the re-engineering of the internet’s architecture into the hands of US governments which directly affects what the United Nations described as “a Human right to the access of information via the internet”
We have already seen copyright infringement measures put in place, the best example by Google and how they don’t index top torrent sites, YouTube (owned by Google) whereby software to detect copyrighted songs ban and restrict video postings by any user that is not the copyright holder. This is the gradual evolution we need to stop copyright infringement and bring the little control to the internet that is needed. I am not in support of piracy; I do not condone the illegal hosting and distribution of software and files. I do however support innovation online and growth of the internet. I have deep concern that any bill of this nature will have  a massive detrimental effect on both of these and the freedom of information.

I hope this paints an easier picture than reading and trying to decipher through the complex structure and details of the formal documents and I hope you now understand why we must STOP SOPA and PIPA.

The more understanding the people have, the more power.

PROTECT IP / SOPA Breaks The Internet from Fight for the Future on Vimeo.