Rich snippets, the name given to star ratings and other structured data which can appear on search results pages, have been becoming more prevalent in Google search results since the latter part of last year.

The idea behind search engines displaying such data is to provide more in-depth information about the quality of search results to users. For example, recipe sites can use the tag to specify how long it should take to prepare and cook a certain dish, whilst film review sites can give their star rating of the film.

A number of different formats of code markup exist which sites can use to present such relevant information about a particular webpage. Schema.org is perhaps the most useful of these sets of standards since it outlines a set of tags which can be interpreted by many of the top global search engines.  When they were first introduced back in 2009 Google only displayed rich snippets for a very small subset of sites in their index as inclusion was slowly rolled out.

Although the presence of supported structured markup tags on a webpage is no guarantee such data will display under a result, the past few months have seen rich snippets appearing more regularly. As Google appears to be more willing to display the data they contain, the adoption of the relevant tags has increased.

There have been a host of case studies showing that the display of rich snippets on Search Engine Results Pages increases click-throughs on listings so it is inevitable that the temptation to add, at best, dubious microdata to webpages is too much for some people.  By default Google currently takes on-trust the information you provide on-page, so in theory you could markup all your products as being rated 5 stars and this rating would then be displayed to searchers.

The combination of the easy to implement tags, potential big gains and an exceptionally blurry line as to exactly what behaviour with regards to these tags is acceptable has meant that some websites are choosing to ‘game’ the system either covertly or more transparently.

A fortnight ago, for instance, the page ranking second in Google.co.uk for the highly competitive term “car insurance” belonged to an affiliate site which is certainly not a well-known brand. Under the site’s title a 5 star rating alongside the phrase “5 votes” appeared.

At the time this was the only listing on the first page of results which showed a rich snippet ensuring that this result stood out from the others which, undoubtedly, would have helped the site attracted a greater number of clicks than it otherwise would.  Looking at Hitwise data for the proportion of clicks the site received from “car insurance” results pages it is apparent that a large jump occurred two weeks ago. 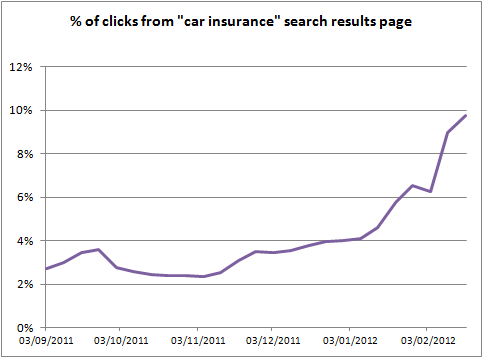 Although Google states that they don’t “use markup for ranking purposes at this time” this doesn’t necessarily mean the presence of rich snippets will not help rankings at all. Rankings could be influenced indirectly as a result of the presence of rich snippets encouraging a higher number of click-throughs, which subsequently lead Google to believe that the site was more attractive to searchers for a particular term. As Google wants to return results that people will find useful, a high CTR could well result in their algorithm bumping up a site’s ranking.

This could perhaps explain why this particular site has fallen from such a high ranking position so rapidly at the same time as its 5 star rating snippets disappeared. With the affiliate site’s star rating snippet now disabled in Google (but still present in the page mark-up – as can be tested with Google’s Rich Snippet Testing Tool), the page’s ranking has dramatically fallen with the site only just clinging on to a top 10 position.

The rich snippet listing for this site stemmed from code on the homepage surrounding 5 single line reviews which also awarded star ratings to the site. Whilst on-site reviews are an appropriate way to assign a score to products on ecommerce sites there is, of course, no guarantee of any quality control beside that of the trust people have in major brands. When on-site ratings which relate to an entire site rather than a specific product are shown things start to get messy, as explained by David Naylor.

Over the past few weeks I’ve come across star ratings in rich snippets taken from a variety of sources. Ranging from genuine looking on or off-site product reviews, rather misleading store wide reviews which show up alongside individual products, dubious looking on-site reviews and even instances where sites have simply awarded themselves a certain score which they have marked up in their own source code without any reference to reviews.

By including star rating rich snippets generated entirely on on-site markup Google are effectively bringing the issue of fake reviews straight on to their own search results pages. There is a definite trust issue here that Google will need to address – I believe casual searchers are likely to be persuaded on which site to click through to based on ratings they may believe to be independent.

Clearly third party review sites are not able to detect every fake review but I think consumers would rather put the trust in the hands of an independent source of ratings than a site itself. Sites such as Feefo.com, which claim to gather reviews only from genuine customers, are one way which could help to address this.

So far there has not been any clear statements or guidance from Google. The form recently announced by Google’s Pierre Far to report the mis-use of microdata markup may help to crack down on abuse of the tags, with Google able to disable the rich snippets of offending sites, though their form for reporting paid links has certainly not been successful in stamping out that practice.

With the roll out of rich snippets set to continue, hopefully Google will eventually issue a set of guidelines outlining exactly what is, and what is not, acceptable.  This will aid in the regaining of trust from users when using Google star ratings. 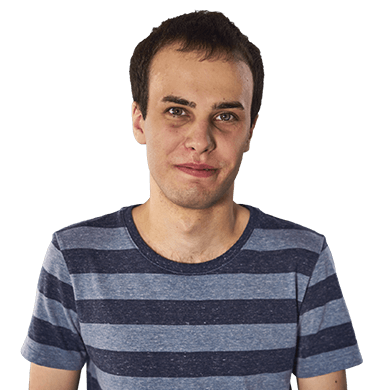