AI and its future uses in digital content creation

Artificial Intelligence (AI) systems are beginning to replace the human faces in a number of industries and work forces, from media to healthcare. Last year, it was even heralded the ‘fourth industrial revolution’ at the World Economics Forum. With self-driven cars and dexterous robots on the rise, it’s hard to deny that we’re on the cusp of a new technological era. Digital content creation is no exclusion. In an industry that feeds off human qualities like creativity, empathy and humour – robots surely couldn’t rival human wit?

Wrong. Did you know the content you’re reading was generated by a robot?

Okay, it wasn’t actually – but soon it very well could be.

Where will the AI revolution take us?

In 2013, AI was in its infancy in digital content creation, now in 2017, it’s making waves in the commercial and public sectors. Businesses are rapidly dropping out of traditional marketing systems and opting for AI for its formidable ability to gather, analyse and forecast consumerist interests. AI can penetrate the jungle of data on the internet and help digital marketers create more suitable, and ultimately more profitable, advertisements for the right audiences, based on demographics (age, gender, interests, education, profession etc).

AI has, ironically, paved the way for an ultra-personalisation in digital content-creation. As Ryanair’s head of digital experience, Dara Brady, explained, personalisation is “about being more relevant, more contextual, and putting the right things in front of people at the right time. It’s about having a relationship at a much deeper level.” And this personalisation is now necessary for survival in the commercial arena.

The AI in enterprise level personalisation tools provide a way to draw insight from insanely large amounts of data enabling marketers to leave the decisions in the tailoring and personalising of their web properties in the relatively safe automated hands of the machines.

How many times have you logged onto Facebook to find an advertisement for a suede bag bizarrely similar to the one you recently looked at?

Don’t tell me you just thought it was a coincidence… well that is just simple retargeting, the arrival of AI has the potential to make this space really very spooky indeed.

Reducing manual effort and cashing in

You, human, will never be as efficient as AI and maybe not as articulate either. By using certain tools and programmes, AI can convert raw data into well-written content in different formats, from blogs and product descriptions, all at a modest rate of 2000 articles per second. It’s no wonder that, according to Gartner, by next year machines will create an estimated 20% of business content! International companies like Yahoo, Samsung are already using automated content creation systems by AI.

So AI is not just changing the face of digital creation, it might be removing the ‘face’ altogether. Coca cola recently ditched its blood and flesh creatives for software algorithms in a Frankenstein-like experiment to see whether AI can outdo their human creators. Mariano Bosaz, Coca-Cola’s global senior digital director, has even conceded that replacing humans with AI is part of his ‘long-term vision’ for the company.

AI’s vast benefits are not just being reaped in marketing, but also in journalism. Publications like The Washington Post are producing explanatory, insightful articles through a new system known as Heliograf. It works like this: editors create narrative templates for the stories, using key phrases for a variety of potential outcomes, then they connect Heliograf to any source of structured data—in the case of the US election, it was the website VoteSmart.org.

With Heliograf, The Washington Post is able to both expand and diversify its audience. Rather than targeting a wide audience with a small number of labour-intensive human-written stories, Heliograf can target many small audiences with a huge number of automated stories about niche or region-specific topics.

Below is an example of auto-generated news using data from the 2012 Olympics. 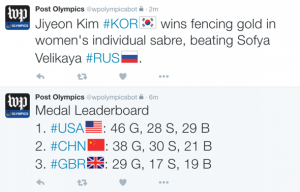 You might be inclined to think that the rise of AI in journalism will cause a digital content to lose its human essence. But don’t worry – humans aren’t going to be made altogether redundant. AI is helping to free up reporters from mind-numbing tasks, like poll coverage in election results, enabling them to focus on stories that require a human perspective and response.

AI is also helping to prevent fake-news from polluting the media. For example, Reuters’ algorithmic prediction tool helps journalists gauge the integrity of a tweet. The tool rates stories based on their “credibility” and “newsworthiness” by analysing how it’s spreading across social media and if users confirm or deny breaking developments.

It’s clear that the possibilities for AI are formidable, unpredictable and vast. Global CEOs and senior business executives say that the acceleration of innovation, but also velocity of disruption caused by AI are hard to comprehend or anticipate. Even for the best connected and most well informed humans –  AI is a weapon that no one knows quite how to wield yet.