I have been a bit of an Android fan since the early days, having owned the second Android phone on the market, so was pleased to find out that Google had released of an official App for Google Analytics.  I downloaded the app recently and put it through it’s paces. Would I use the app on a regular basis?

The App consists of four main screens: Real-Time statistics, dashboards, automatic alerts and custom alerts. It is easy to scroll between your accounts before you get to these screens, but if you have a full account like me, you will appreciate the ‘recently used’ section at the top.

Real-time Analytics is great to get a snapshot of how busy your site is at any one time. This feature has been in beta a while in the web version. It’s interesting to see how well a great piece of content is doing, or where traffic is coming from when it is busy. It kind of makes you think of a site in a more fluid and interactive manner. I am sure the mesmerising information has taken up a few flatscreens around offices of large websites.

I had some issues with this with ‘unauthorized access’ messages on some sites, even when logged in with Admin users. It seemed to work fine for other sites, so perhaps this is just a glitch. 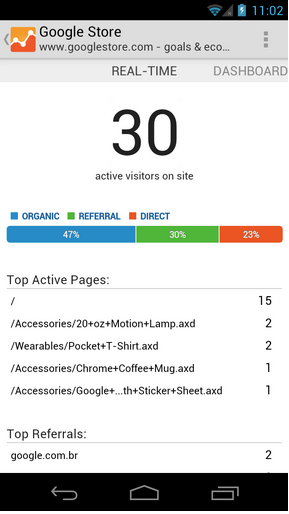 The dashboards give you a graphical representation of data for the site, and are completely customizable. Simply tap on the graph you wish to edit, and the graph can then be deleted or the settings adjusted. 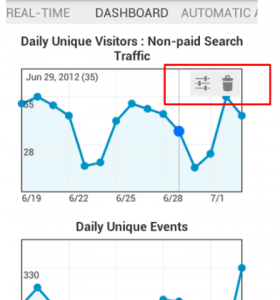 What would you see if you selected ‘non-paid traffic’ and kept the metric on ‘clicks’? Answers on a postcard or in the comments below! 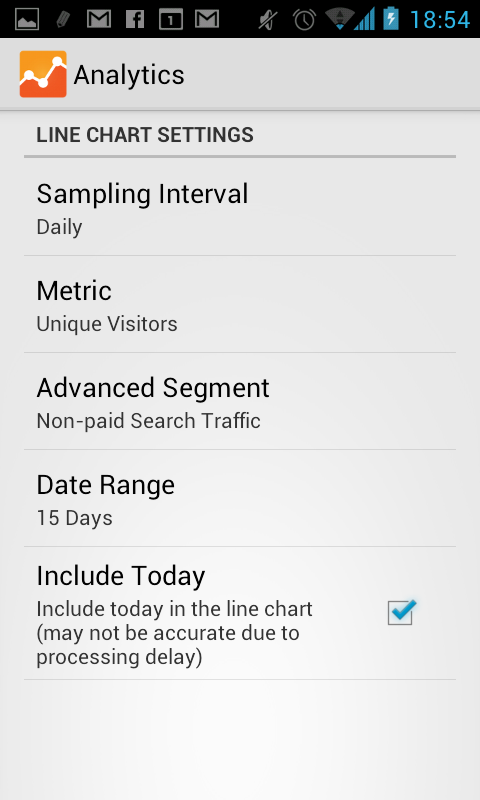 Google will cleverly detect any unusual patterns in your data and present them to you here. Some of these traffic spikes can be quite interesting. Tap on anything of interest and you will get a larger representation like the following graph: 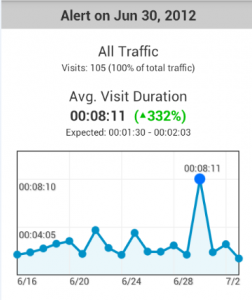 Setup Custom Alerts of what you want to see

The standard reporting could certainly be of use for digital marketers, but even more insight can be gained by using Custom Alerts of the key metrics you are monitoring. Setting up custom alerts can easily fill an entire post, but if you would like to know more then read this great guide on setting up custom alerts for your site. If you don’t do this, you will get an empty screen here.

You might want to setup alerts for traffic increases on certain traffic sources, such as reddit.com for example. 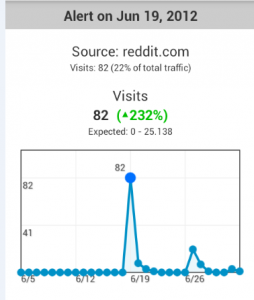 Although the app can give some useful data, I am one of those who always wants more. I think the app could benefit from some more features based on standard Analytics reports, such as:

The Google Analytics app can be downloaded from Google Play (Formerly Android Market!).

Google is focussing on mobile devices, in a big way

Google have certainly been busy focussing  on mobile specific applications recently, as on the same day that the Analytics App was released, they also announced Mobile App Analytics. This will enable developers to track all sorts of useful data from within their Android Apps such as the following: crashes, traffic sources, app versions, overview of devices, user behaviour,  goals and in-app purchases. It should also show how many Android users are still using Gingerbread. This section of Google Analytics is currently in Beta, and you can apply via a lengthy signup form.

With the increasing popularity of Android Tablets amongst professionals and the launch of the Google Nexus 7 tablet, we can expect Google to produce many more apps and improve mobile device tracking while they are at it.