A valiant crew of Found and Fusepump representatives, otherwise known as ‘Team Smithfield’, descended upon T47 at London Bridge yesterday for their shot at SuperGames 2011 glory.

This hard-fought event, brilliantly organised by Affiliate Window and buy.at, brought together diverse teams from across the industry to test their skill at football, netball, ping-pong, archery and dodgeball.

Team Smithfield highlights included a breathtaking draw with Quidco in one of the most thrilling football matches of the day – special mentions have to go to Fusepump’s Rob Durkin and Charlie Hawker for their footwork finesse, Jamie Brady for a particularly tasty backwards pass, Pete Newman for his heroic goalie work and Found’s Luke Townsend for fearsome form that did quite literally leave him breathless: 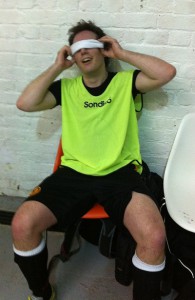 Another special mention has to go to Sean McAuley of Fusepump whose innovative approach to shinpads saw him stuffing two copies of ‘Shortlist’ magazine down his socks – surely a sterling example of Team Smithfield’s unrivalled ingenuity.

The rules of netball unfortunately remain a mystery to Team Smithfield, and up against netballing demons and first placed team of the day, Neo Ogilvy, our contribution to the game largely consisted of running up and down the court while having the whistle blown on us constantly for various transgressions – however this did appear to be a common theme across many of the matches!

Ping-pong saw us up against UKWebMedia who seem to have recruited a team member who has surely studied table tennis with Chinese masters, and an enormous effort on behalf of Fusepump’s Tom Staveley was unfortunately not enough to see Team Smithfield win through.

Let us gloss gently over our dodgeball result and focus on the archery, where Sean ‘Bullseye’ McAuley clawed back much needed points for Team Smithfield to bring us to the not-so-respectable result of being the 16th placed team on the day.

With our dreams of glory lying in tatters like the discarded sweaty netball bibs on the concrete floor, Team Smithfield took solace in a few well deserved beers and pizza followed by some serious ‘networking’ at the after party.

Many thanks to Affiliate Window and buy.at for a fantastic event, and to our Fusepump team mates for their heroic efforts. We’re already in training for next year!