Today is another milestone in the evolution of Twitter as UK brand pages arrive on the computers of British users this morning. The original launch which fixated on American super brands included the likes of Coca-Cola, Disney, Nike and McDonald’s.

With the launch finally reaching the UK, focus on strong UK household brands such as Cadbury, Asda or Sky HD have adopted the new layout which changes the ways in which users interact and consume information on the micro blogs. 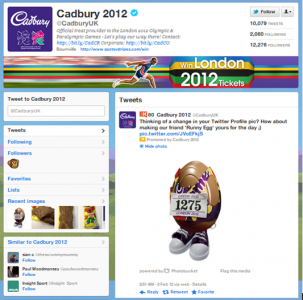 Twitter began rolling out the new ‘brand pages’ in December of last year, with a focus on rich content, customizable banner advertisements and the ability to “stick” tweets to the top of the page as a prioritised message to followers of the brand. These “brand pages” keep the micro blogging platform in close functionality with the other online social networking giants Facebook, but more notably in line with the recent brand page roll out from Google+.

The redesign allows companies more freedom, giving customisation over the look of their pages with extra design space and the much coveted ability to embed multimedia.

How do brands get involved? It’s not free, in fact it’s very far from free; suitors were required to pay a fee of almost £16,000 ($25,000) to advertise in the new format on Twitter. The growing popularity with users and marketers alike, investment in twitter is becoming the norm for brands as their key to marketing insight into their consumer’s habits and brand sentiment as well as being the preference for engagement online.

Part of the reasons for the roll out includes a format focussing on ad revenue and the ability to support advertisers online. eMarketer reported that Twitter’s global ad revenue is projected to reach $139.5 million in 2011 and approach $399 million in 2013. 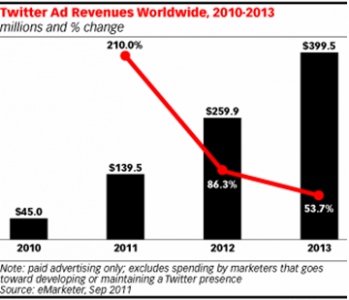 By creating branded destinations as opposed to just simply aggregating content, advertisers are given a platform whereby they can adopt a more rigid and media driven marketing strategy. The use of embedded media and ‘sticky’ tweets creates the possibility of driving additional engagement with targeted content over longer periods of time and thus creating much needed consistency.

Why should a brand embrace the new design and functionality?

Customisable Headers enable brands the ability to have consistency of branding across all of the social media channels with the use of a profile image and a customizable header competing as aforementioned with Facebook and Google+. This also contributes to the creation of strong brand identity online.

Promoted or ‘sticky’ Tweet gives total control over what the users see on arrival to the new brand page and creates a strong space for the likes of promotion and education without any possibility of targeted tweets being lost in the aggregation of tweets as we have previously found.

Embedded Content now goes way beyond simple links to websites and pictures. This functionality opens whole new realms of promotion and education around brands products and services and will give designers and social marketers a platform whereby they can really get creative using the likes of video’s and photographs which can be cleverly used in conjunction with promoted tweets and page design.

Optimized Moderation creates an easier to manage environment for those that manage the day-to-day engagement on behalf of brands. This update allows brands to separate the @ replies and mentions. Users also have a nice option to speak directly to the brand with the new layout using the “Tweet to Brand” option located directly under the header.

Twitters advertising performance options have experienced dramatic improvements over the 18-months with the evolution seeing the introduction of promoted tweets early last year. The new brand page structure creates much better brand destinations and not just accounts & profiles. By creating additional opportunities for user retention the opportunity to drive additional impressions via interaction becomes much easier.

The new redesign for brands is great in principle and really does improve the way in which brands can interact and gather CRM data. However, as a Social Media strategist I am faced with one question. As users become more involved in the online conversation on twitter they become aware of the fact they can only fully interact with the service with the use of a twitter client such as TweetDeck, Hootsuite or Seesmic.

The way in which these social media dashboards display the information to be consumed by the user doesn’t embrace the new Twitter designs and features which poses the following question – does this mean brands will need to build their campaigns with this in mind; focussing on drawing users away from software and onto Twitter.com in order for their campaigns to have maximum impact?

It will be interesting to see if users are driven directly to brand pages in order to benefit from specific promotions and campaigns.