Shoreditch Town Hall was a hive of agencies, advertisers, media and brands. Last Wednesday’s speakers used the stage to share their views on the fun and not so fun parts of our digital world.

The format of the conference was mostly overlapping 20 minute slots, in a similar fashion to TED, with the exception of a few hour long talks. Speakers were notified by a [damning] bell ring as to when they were nearing their time limit. It looked like this warning caught some speakers by surprise, as I felt some of them were only just getting going when they got interrupted.

The vast majority of talks didn’t challenge the status quo or teach enough. However, four did stand out: 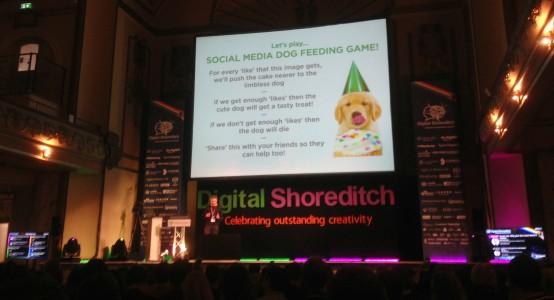 The conference began with a talk by the charismatic and interesting Jon Morter. The man behind the “Condescending Corporate Brand Facebook page” has an abrupt style and his free flowing taboo got a great response from the fresh faces and wide eyes on an early Wednesday morning.

Jon spoke candidly and openly about the cringe-worthy moments of brands who have failed terribly at engaging their ‘Fans.’ His slides featured many misguided engagements and were as attention grabbing as his witty demeanour that has earned him the description “the Facebook equivalent of ‘This Is Spinal Tap’.”

Jon’s interview afterwards is on Vimeo for your viewing pleasure. 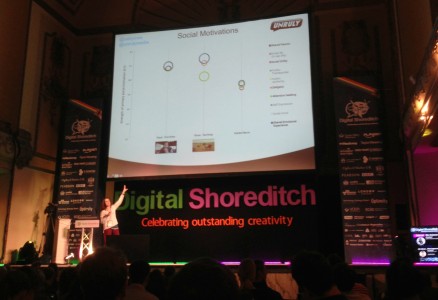 Cat Jones talks about the motivating factors of sharing

Cat Jones from Unruley gave an interesting talk on how she and the Unruly Media team have managed to crack the code for social video marketing. She gave examples of their software and its deep analysis. More importantly, she spoke about the prediction of virality for video marketing.

Just as Cat began to get into the real details, the bell rang… She persisted but the bell didn’t stop and I was personally disappointed she couldn’t carry on!

I was interested to hear the talk by Chris Schaumann, Global VP, Digital & Social Marketing and CRM at Nokia. If you have had your eyes on digital at all recently, you will know all about what they are calling the Elop Effect and more notoriously, the “burning platform memo.” This was the the decline in Nokia’s market-share since the first quarter of 2011 when Elop, the CEO of Nokia changed the phone OS from Symbian to Windows.

The talk themed on transforming Nokia’s marketing organisation successfully and gave a nice rounded insight into marketing trends and the innovative approach Nokia has taken to adopt to this fluid digital world.

His viewpoint was interesting, and the targets pretty huge. Their desire to become the most talked about tech brand on the internet in 2013 seems far-fetched for a brand that is losing market share by the minute. Despite this, they definitely have the right attitude, seriously recognising the role social can play in their fight to once again become a serious mobile contender. The slides are on Chris’ blog

Jani Cortesini of Inferno pragmatically talked about the anatomy of a newsjack or trendjack, when brands or persons capitalise on the popularity of a news story to amplify their sales and/or marketing. He shared an experienced account of how we should and shouldn’t newsjack and how to avoid social media disasters as has been experienced by so many of the big boys. He talked tactics of perfecting a newsjack, listing the do’s and don’ts, tools and resources needed.

One notorious example occurred as the revolution in Egypt was unfolding. Kenneth Cole tweeted: “Millions are in an uproar in #Cairo.  Rumour is they heard our new spring collection is now available online…”  The retailer was met with harsh widespread criticism due to the nature of the Cairo hashtag being used as one of the only channels for legitimate breaking news on the revolution.

Jani’s talk was insightful and gave the audience some strong points to think about, which is what I really wanted from my day at Shoreditch Digital. The slides are here.

So what did I think?

Overall, I didn’t benefit much from the sessions on Wednesday. Perhaps, I was expecting more than I should have. I was looking to hear about high-quality case studies and new methods of practice. After all, what is the point of a conference if it isn’t intended to get attendees thinking or reshape their thinking entirely.

Did I get that at this particular conference where the majority of talks were severely time restricted? No. Definitely not. Plus, the speakers seemed to feel this way too.

Search the twitter hashtag #DS13 and check it all out for yourself.