After the rumours, Twitter #music was finally launched yesterday. I got my hands on the iOS app version this morning, flicking, swiping and of course, listening in to what the app had to give me. The slick, visually impressive app was first to hit iPhone users, which was then followed several hours later by the equally impressive web version.

Its function is simple. Twitter activity like engagement and tweets is used “to detect and surface the most popular tracks and emerging artists,” as was explained on the official Twitter blog.

There are 5 navigable categories:

Clicking play on any of these pages lets users listen to track previews and follow artists on Twitter.

Where the value is

It’s being able to follow artists on the fly and then discover other profiles connected to these that is the genius on the UI. The fact that you can flick between tracks and artists so sporadically means there is likely to be a great increase in users following newly discovered artists.

The web player features two buttons: iTunes and compose. They make it completely effortless to both purchase the song and broadcast your thoughts, another couple of features incorporated to keep the music people happy.

Where I found the most value was when linking my Spotify Pro account, which enabled me to play full length songs, a feature which is also possible using Rdio. The downfall is if you don’t link it with Spotify, you’re left with short previews of tracks from iTunes.

Twitter tell us 50% of users follow at least one artist. Musicians, artists and DJ’s alike represent a huge portion of the most followed Twitter accounts. This will no doubt be a contributing factor to the thinking of the Twitter #music creators.

Only time will tell.

However, take one of my personal favourites Flying Lotus for example. Almost a quarter of a million followers are always waiting to hear what Steven Ellison has to say. Now when he releases a new track, his followers can directly click play without having to move from their twitter feed, or just as easily buy them off iTunes. 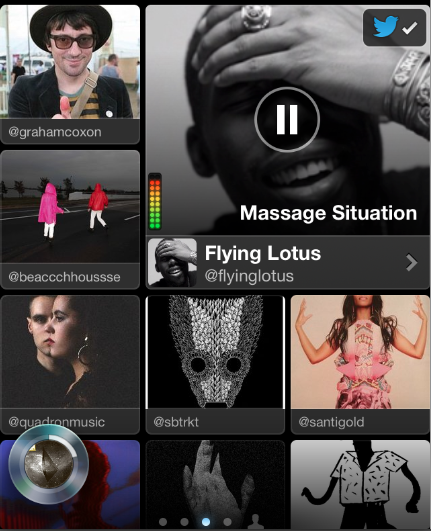 The good, the bad and the time will tell

Out of the app’s five sections ‘Emerging’ is the one I think can be best leveraged by new bands, musicians and DJs. Here, the algorithm gives the user music just as it’s about to hit the tipping point of trending…. I just found London Grammar using this very function. (Check them out if you’re into The XX kind of vibes.)

The #nowplaying feature is something that I can see as the Achilles heel with the service. Do I really have anyone on my Twitter feed that I care about their music choice that much that I would use an app to investigate further? Personally, no. I use the perfectly engineered Spotify Facebook app for that, and it’s going to take something pretty damn special to make me switch.

With so many new social networks appearing every day, there are an increasing number of skeptics. They want to know why Twitter would release a music app, where the money is and question if anyone actually cares what the people they are following listen too.

Sure, these are good questions but in all honesty, Wired.com’s “Why Twitter Music Is Totally Going to Work” seems to get the point. “ It’s simple: Twitter Music is all about getting you to spend more quality time with Twitter. It’s about everybody’s favorite buzzword: engagement… it’s a place for you to go and find new artists and then (and here’s the part that matter[s] for Twitter) follow and promote them.”