Yesterday I had the pleasure of heading down to Google’s offices in Tottenham Court Road for a presentation on Google Affiliate Network, which launched recently in the UK after finding success in the US.

Walking into Google’s offices is like walking into the future. The corridors are wall-to-wall tiles that gleam spotlessly, the occasional LED display breaking up the monotone whiteness. You expect to see small droids scuttling about, not the slightly scruffy employees who amble about giving each other high-fives and saying “dude” a lot, iPads tucked under their arms. 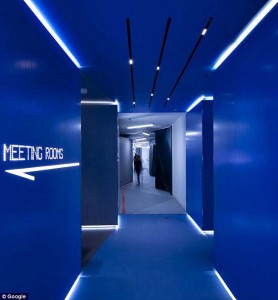 The main presentation room was called “The Town Hall” and looked more like a small nightclub, with vast screens built into the wall and a mixing desk set on a podium in one corner. Every doorway seemed to open on some manner of office paradise, be it a room full of enormous soft chairs set among a jungle of plants, a library section looking like a reading room from Senate House, or a reception area with lovely views of the London skyline and computer displays set into the floor spewing Google propaganda. The one thing that the place didn’t seem to have was actual, traditional office space; you know, with desks and computers and stuff. I’m assuming that they were hidden somewhere out back, Google not wanting the ugly reality of 9 to 5 office work to intrude upon their utopian future vision.

But enough about the office; I was there to learn about Google Affiliate Network (henceforth GAN) and, having learned plenty, I’d like to share a bit about it with you.

To anyone who has spent any amount of time wrestling with the various interfaces and systems of the established affiliate networks, GAN’s user interface is a definite eye-catcher. Mimicking the tabbed structure of Adwords , it has a clean customisable look that appears to offer up exactly the information you’d want in exactly the place you’d want it. Advertisers, links, products, promotions, vouchers and feeds can all be searched and organised with ease, and extensive filtering tools allow you to look at the performance of not only the areas you have already joined up to, but also those that you haven’t. In this way you can quickly locate programs or links that competitor affiliates are having success on and muscle in on the action.

One section of the interface is devoted solely to Top 10 lists, showing best performers across the board based on a variety of criteria. And it’s not just the advertisers who are ranked in this way; the best performing affiliates are granted VIP status, earning them a dedicated AM, bespoke reporting, and more importantly a badge in the UI which can be searched by merchants. In other words, find success on GAN and you can expect merchants to start searching for you.

The reporting is pretty standard stuff, though there’s an API with which you can suck out all the data into a third-party system of your choice. One report, however, did strike me as quite impressive; the Benchmarking report was a dense table full of figures and symbols, and it gave your current top level performance data compared against both your previous performance and the performance of other affiliates on the program. Has your performance on a program grown 10% while that of your competitors has grown 80%? Time to take a closer look at the program to see what you’re missing.

Overall, even when you look past the carefully stage-managed Google presentation, I got quite a positive impression from GAN, though I did have a few misgivings. Firstly, Google’s current crop of advertisers is slim, though I expect that will change quite quickly. Secondly, the ease with which you can find programs, products, links or even keywords that are proving successful means that it’ll be far more difficult as a publisher to find an overlooked niche; the whole thing seems instead to have been set up to encourage affiliate bid wars. Finally, though Found pride themselves on adhering to Google’s rules concerning site quality, many smaller affiliates may find themselves unable to compete, for with Google as overseers of both Adwords and the network, any unfortunate affiliates finding themselves on the wrong end of a slap may find they possess neither the resources nor the possibility of a “black hat” workaround to get back in the running. Google Affiliate Network has the potential to be a network where competition is fierce, the rules cannot be bent, and the winner takes it all.